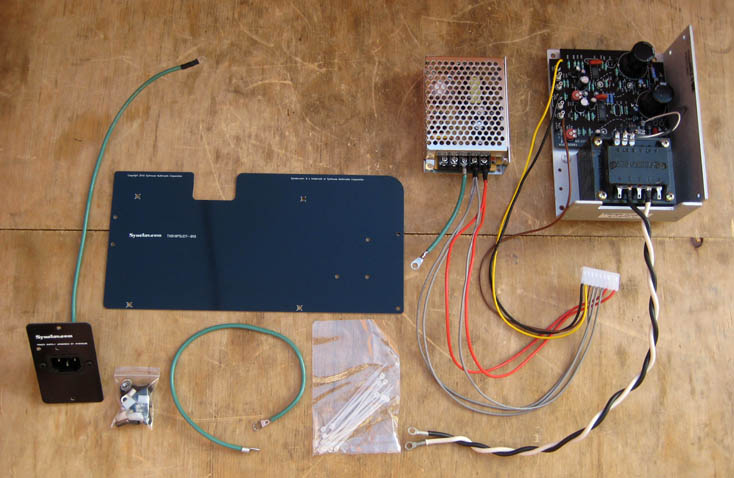 The Yamaha TX816 (most people call it a TX816 but the model number shown on the serial number tag on the back of the machine can say TX216 or TX816, depending upon how it was sold, US list prices in 1985 were $2,095 and $4,995, respectively), described as eight DX7s in a rack, is an instrument of enduring popularity, but it has 1) a horrible power supply and 2) an unfortunate AC power cord setup.

Even back in 1985, the Yamaha TX816 was well known for having a very bad power supply, it either had a loud buzzing, humming sound in the room, or it just failed outright. Anyone involved with electronic music or instrument sales knew this well all the way back in 1985. Various synth technicians over the years have figured out how to replace a dead one with something else, usually taking a lot of time doing them one by one, and not ending up with anything that could be considered an upgrade (usually a crappy, noisy combo switching power supply like a Skynet because it's all they had or all that they could make fit).

A huge percentage of TX816 power supplies have failed or become very noisy. Bad power supplies (and other components, such as the  LCD/backlight on the Yamaha REV7 reverb, more than half had failed in two years, almost none exist still working in the world today) are common to Yamaha products, and nothing has ever been done about it. The slightly newer Yamaha TX802 module is also known for having a humming, buzzing, failing power supply, and the Yamaha 02R and 02R version 2 digital mixers have suffered an almost 100% failure rate, and even when fixed, fail again, because they are garbage.

Work was done here on a number of Yamaha TX816s 2016-2017, and it was shocking to see that all over the web, everyone still knows about the bad power supplies, and still no one had done anything about it. 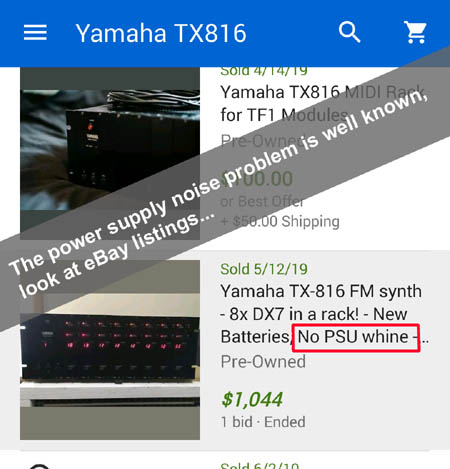 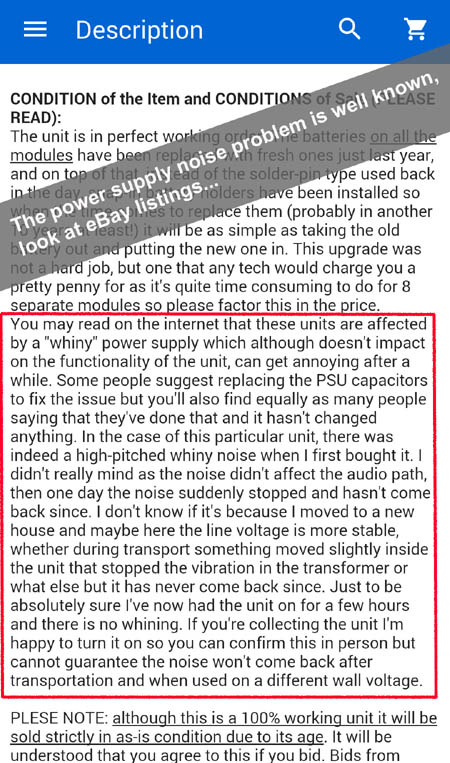 What people on the web DO NOT discuss is how terrible and insufficient the Yamaha TX816 power supply is even when it is working properly. It doesn't have nearly enough power for eight TF1 modules. There is no power headroom, so transient response is suppressed when any sounding voice has to suck power away from the other voices/modules. 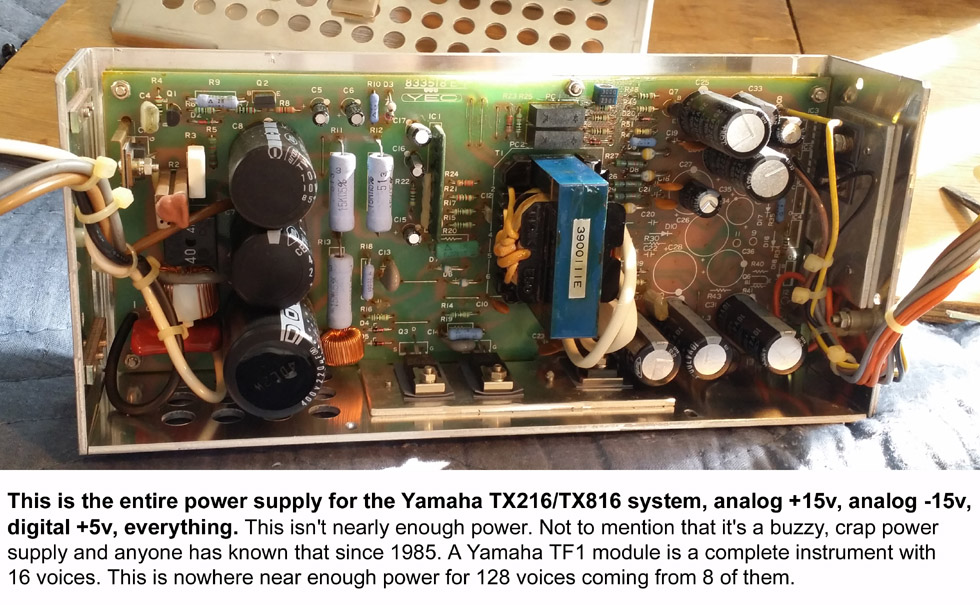 The Yamaha TX816 power supply doesn't supply nearly enough power for eight TF1 modules. Even when first turned on cold---WITH
NO VOICES SOUNDING---the +15v load is drawing 80% and the -15v is drawing 91% of the rated power supply capacity. If you don't believe this, you can cut the wires and clip your DMM/ammeter in there and see for yourself how much power it is drawing when turned on cold. And keep in mind that the meter is averaging, it is not showing transient peaks of usage which is, well, where your audio is.

A TF1 module is a complete instrument, a 16-voice digital algorithm synthesizer with MIDI. If Yamaha had made one of those in a standalone box, it would have been fitted with this crap Yutaka power supply, and the load and amperage capacity would be well matched. But EIGHT of them on one of these crap Yutaka power supplies? That's really a joke.

The Solution:
Synhouse has engineered (2016-2019) a massive power supply upgrade that puts a Synclavier power supply into the Yamaha TX816. It's a little more than that, it's actually a custom +5v digital power supply and +/-15v Synclavier analog power supply that goes into the TX816 with upgraded wiring, improved grounding, and additionally gets rid of that ridiculous donkey tail AC power cord (only 2-prong, it isn't even grounded), putting a normal, properly grounded, IEC AC inlet on the back so that it can use a standard computer power cord. 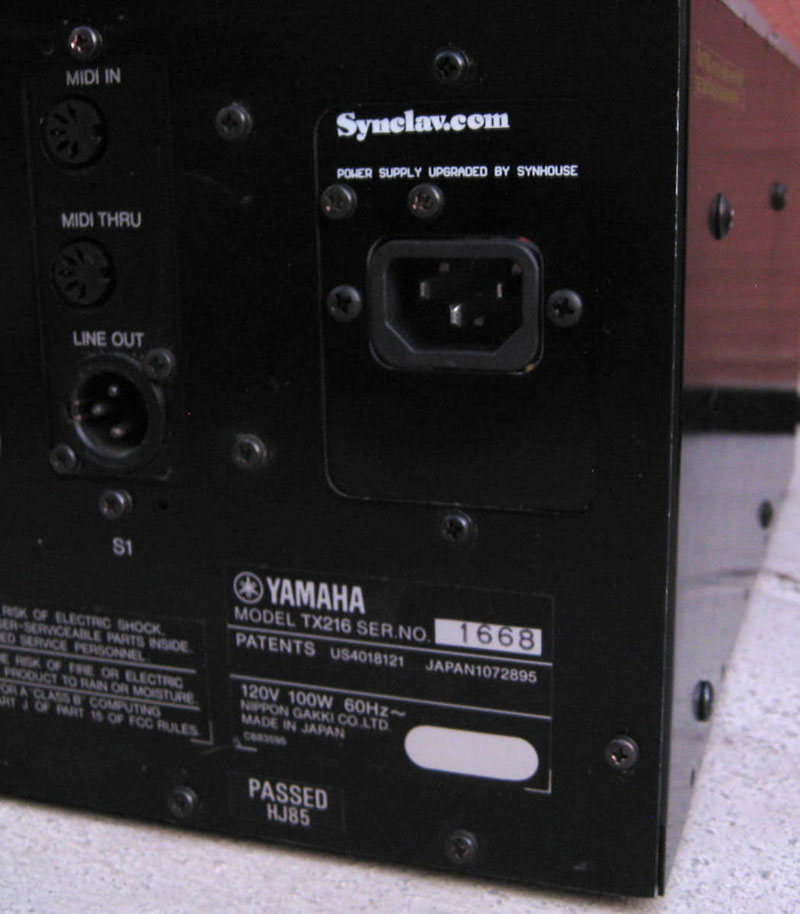 Three different factories (regular Synhouse subcontract suppliers) kindly contributed to this very, very low production volume product and made it possible to have high quality at a low price. It should remain available for a number of years.

The kit includes drilling template, both power supplies, AC inlet panel, and wires, all pre-assembled as far as possible, everything needed except your tools (electric drill, 2 drill bits, center punch to mark holes for drilling, 1 or 2 Phillips screwdrivers, soldering iron). 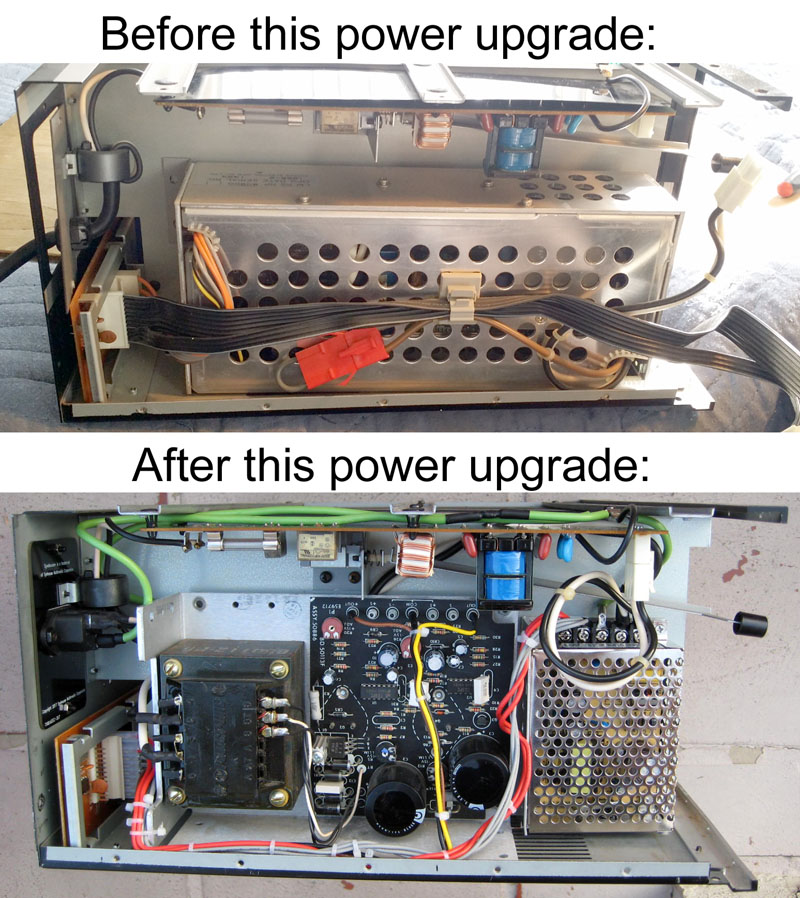 Installing this isn't quite as easy as installing a Synhouse MIDIJACK, but it isn't difficult at all, it just requires some tools and some care and caution as you work. The installation method is well described and illustrated here: