Ugly fans? The solution: Black fan overlays. Greatly improve the detailed appearance of your Synclavier --- by restoring the look to better than new with these high quality black fan overlays from Synhouse/Synclav.com.
$4.97/each   -   3 for $14.90   -   9 for $44.71
Shipping for 3 is $5 worldwide. Shipping for additional quantities purchased/shipped at the same time is free.
The unfortunate situation with the latest style Synclavier Control Units with doors (1989-1992), especially those in black studio skins, is that they were so nice looking and the design was so incredibly focused on cosmetic appearance and used so many custom made parts and trim pieces that have gone missing on every machine in existence since then and/or just deteriorated badly over time, that all the used systems out there have a really ratty appearance. The perfect starting look makes it fall apart fast. These black fan overlays are just one of many cosmetic trim pieces that were created by Synhouse to solve this problem and make the fully restored Synclavier systems from Synhouse as perfect as they can possibly be. NED was obsessed with the cosmetics and color schemes of their last five machines (All models w/doors: Synclavier 3200, 6400, 9600, PostPro, PostPro SD), so they got round black stickers and put them over the red/white Nidec Torin factory fan labels in order to make them all black. The problem is that NED just used total garbage plain paper labels (of the same quality as anything else at the stationery store), and within several years, they had faded to a lighter color, sort of grayish purple, and started to lift up in the middle and on the edges. They look wilted and heavily blistered, and this is not just on some machines, this is on ALL machines because, duh, those garbage paper stickers were being put directly on the fan, which is an electrical motor which runs hot and bakes the thin, cheap adhesive until it turns to powder. Shortly after, they were falling off of almost all systems. Then they look worse than if they had never had the stickers in the first place, because now they are left covered in brown adhesive crust, and sometimes attempting to take that off is going to pick the red/white off the real Nidec Torin labels underneath. The reason it didn't happen sooner is because the stickers are protected, they are literally inside a cage, the fan grilles, so you can't brush up against them, and you can't even reach the edge of one with the tip of your finger. But if you take a small screwdriver and slip it under the fan grille and touch the edge of the sticker, by now, most of them just fall off immediately. Even when on a Synclavier that has been stored in the Synhouse warehouse for 20+ years and they look to still be in place, moving the machine around a little makes them start to fall right off. This is inarguable, and it isn't hard to find widespread evidence of this problem going back more than 15 years. You can't even look at Synclaviers on the web or Youtube without seeing machines looking trashy because some or all of the black paper stickers have fallen off.
How many are needed? - The Synclavier 3200 w/doors uses 3 of these. - The Synclavier 6400 w/doors uses 3 of these. - The Synclavier 9600 w/doors uses 9 of these. - The PostPro w/doors uses 9 of these. - The PostPro SD w/doors uses 9 of these. - A full Synclavier Tapeless Studio system w/door uses anywhere from 12 to 18 of these, depending upon whether it is based on the 3200, 6400, or 9600. (Note: Some custom machines in different styles [PSMT, small PCI systems, etc.] rebuilt by two of the out-of-business ex-competitors had the black paper stickers placed over the fans because they had much of the surplus NED factory stock left over when NED went out of business. But from the machines in stock and inspected during Synclavier service calls around the world, it seems that supply probably ran out around 1999 and those paper stickers were not produced again, which is good, because they are trash.)
Synhouse is the all-time world leader in the manufacture of drum machine and synthesizer overlays (E-mu Drumulator, SP-12, SP-12 rear jackplate, SP-12 Turbo, SP1200, Emulator II main control panel + Moog wheels panel overlays, Moog Source control panel, and 360 Systems Instant Replay HD Audio 2.0 overlay presently in stock 7/20/2020 with more in design/production stages), so the technology was well in hand to make something nice for the Synclavier cooling fans. Sure, they cost about 200x as much to manufacture as black paper stickers would, but they will last forever and look 10x better from the start, as they are 1) fairly rigid and flat due to the hardness and thickness and 2) made from the same sand textured polycarbonate used on the Synhouse drum machine overlays. These black fan overlays are precision die cut from thick polycarbonate material and affix themselves to the fans with air-curing peel-and-stick 3M industrial adhesive. Just peel the back off, press it down smoothly in exactly the right location, and it's done. The black color can never fade, scratch off, or wear off. This photo shows a dozen of these black fan overlays looking awesome and making a fully restored Synclavier system from Synhouse look better than anything that has ever existed:

While some of these black fan overlays are offered for sale to the many, many others who sorely need them, the primary reason these black fan overlays were created was to achieve perfect results on the fully restored Synclavier systems from Synhouse/Synclav com; If you think anyone else out there past, present, or future has ever shipped Synclaviers with the same level of fit, finish, and attention to detail as Synhouse, you're trippin'. Look at the photo. It is stunning.

This photo shows a good natural light comparison between the wilted, blistered, and faded old NED black paper sticker on the right side, and the unpeeled new Synhouse/Synclav.com black fan overlays on the left side, to compare the quality, color, texture, and thickness: 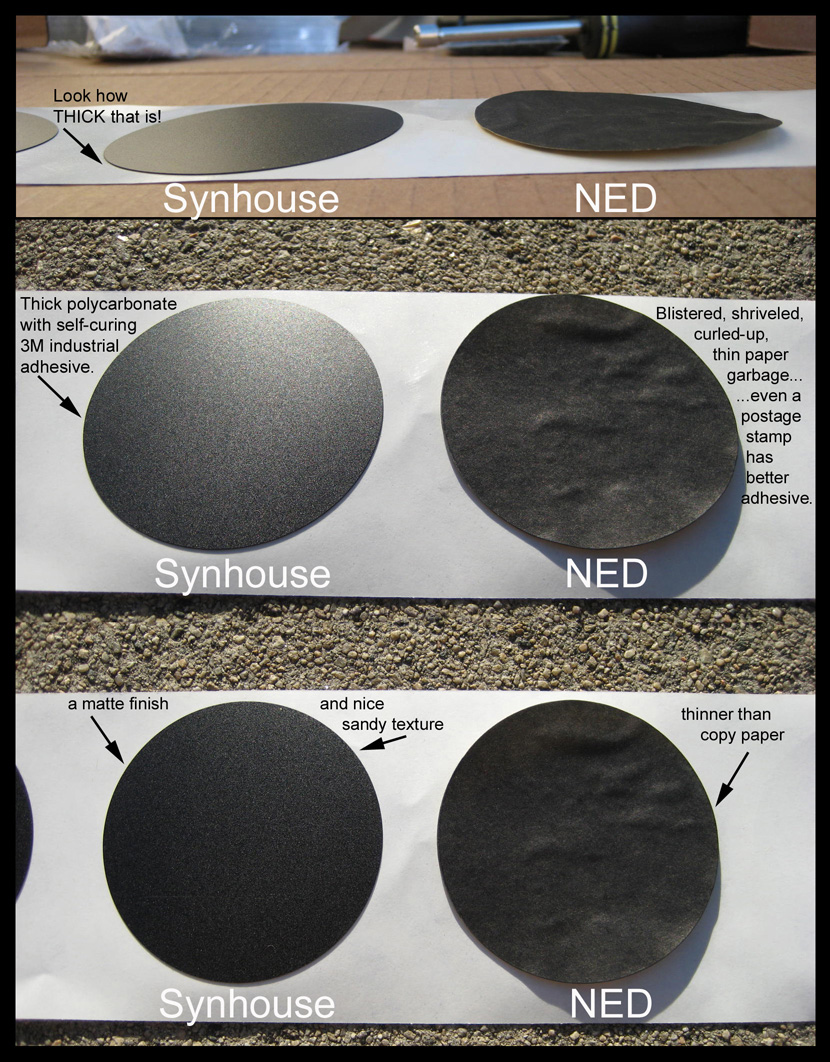 This photo shows the simple process of installing them on the fans: 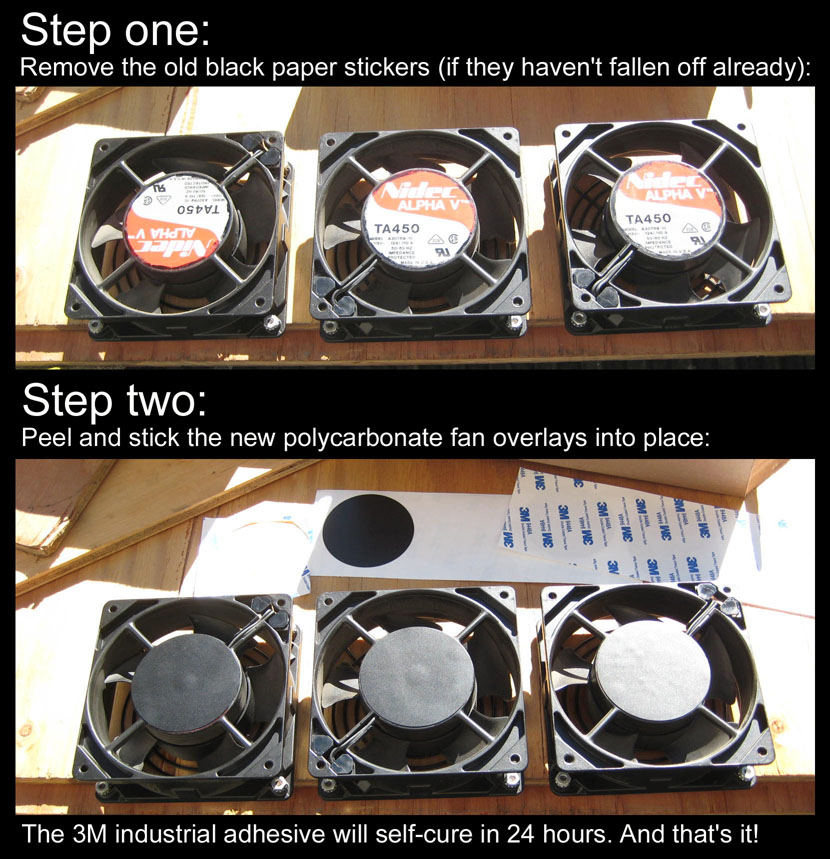 The photos below show many systems around the world (some of these photos were taken 15+ years ago) looking bad without good black fan stickers: 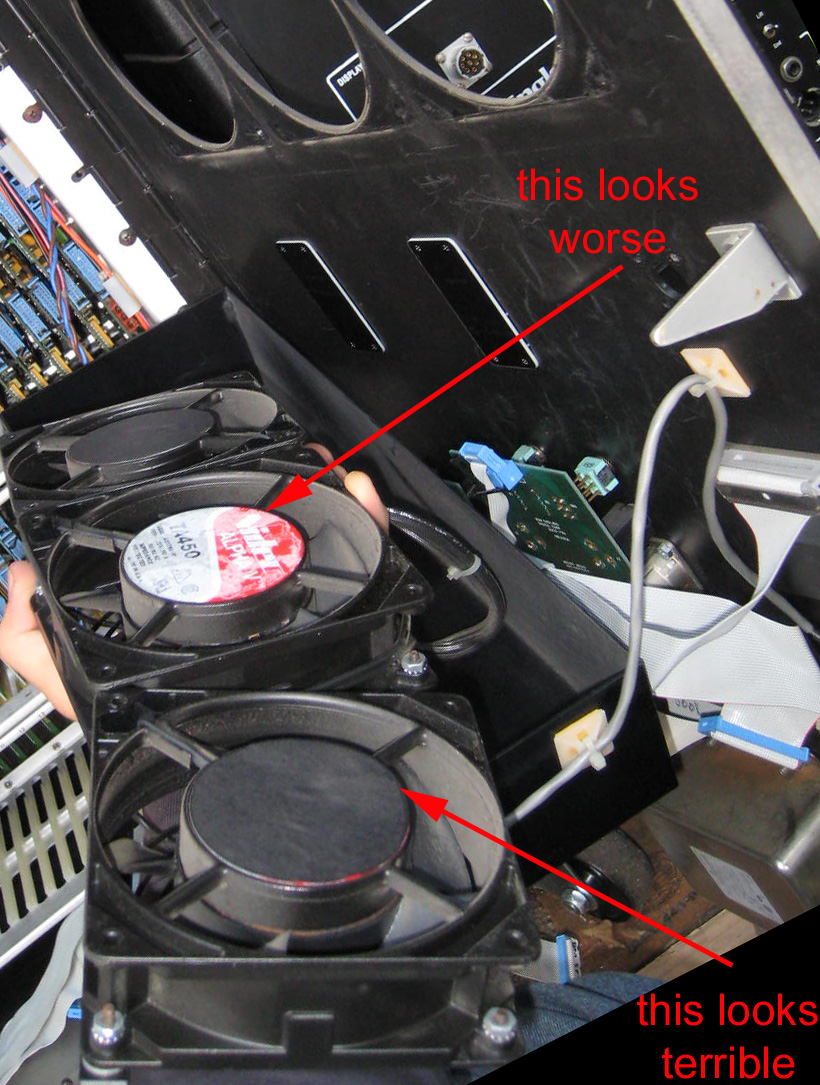 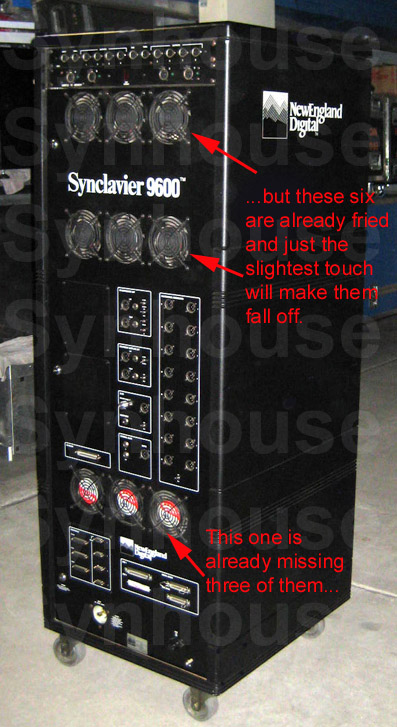 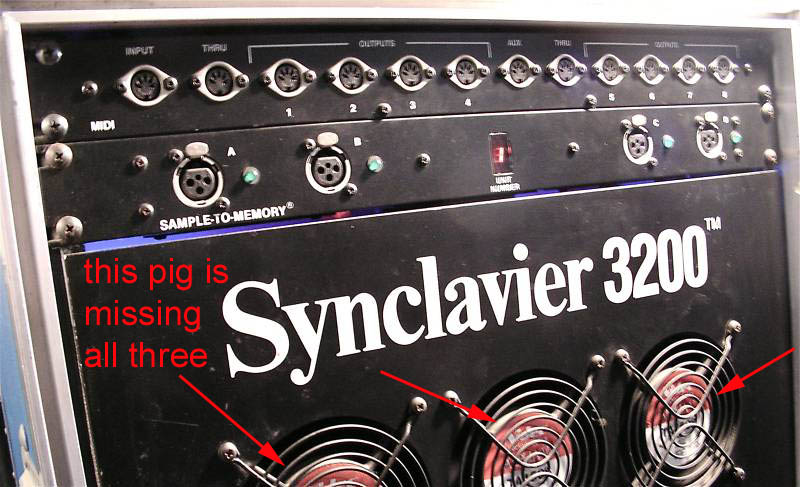 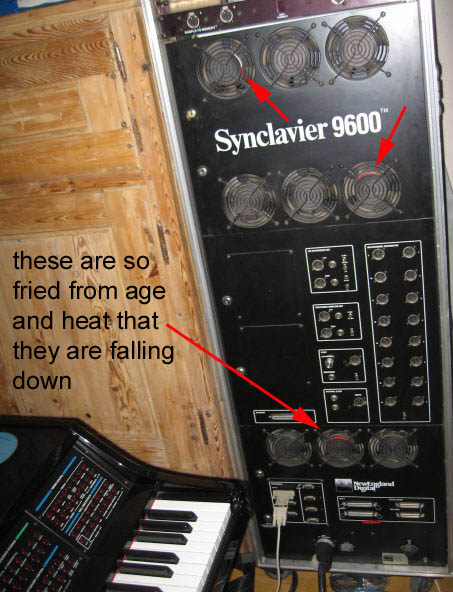 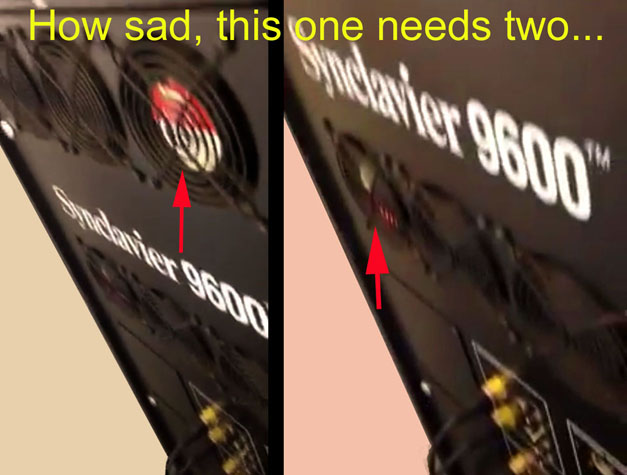 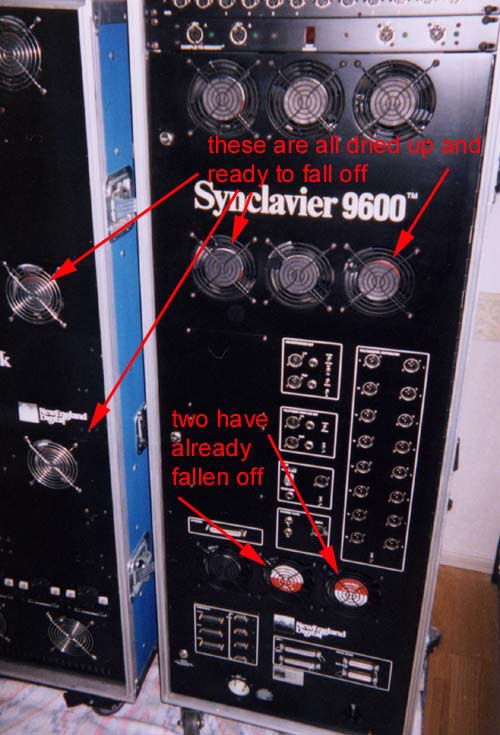 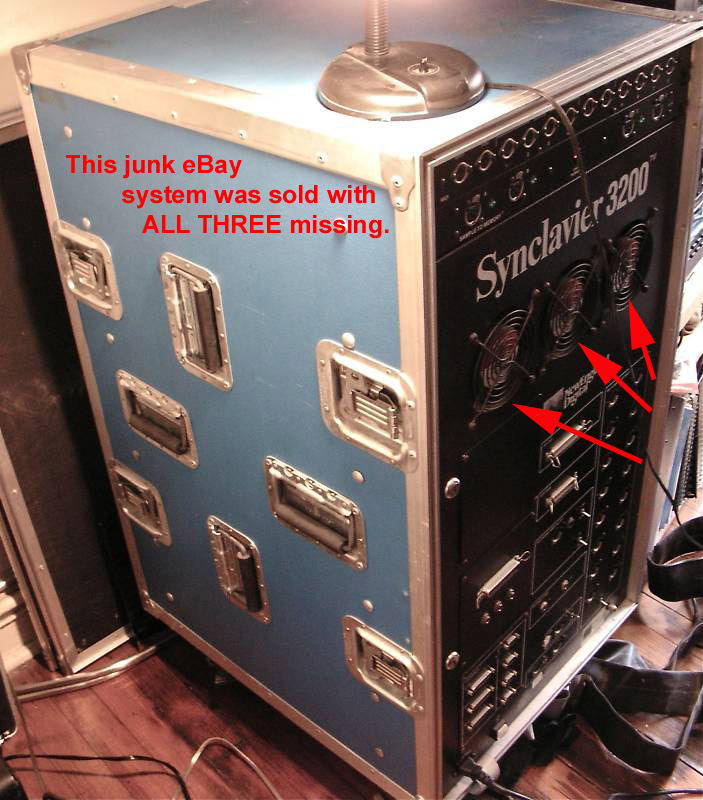 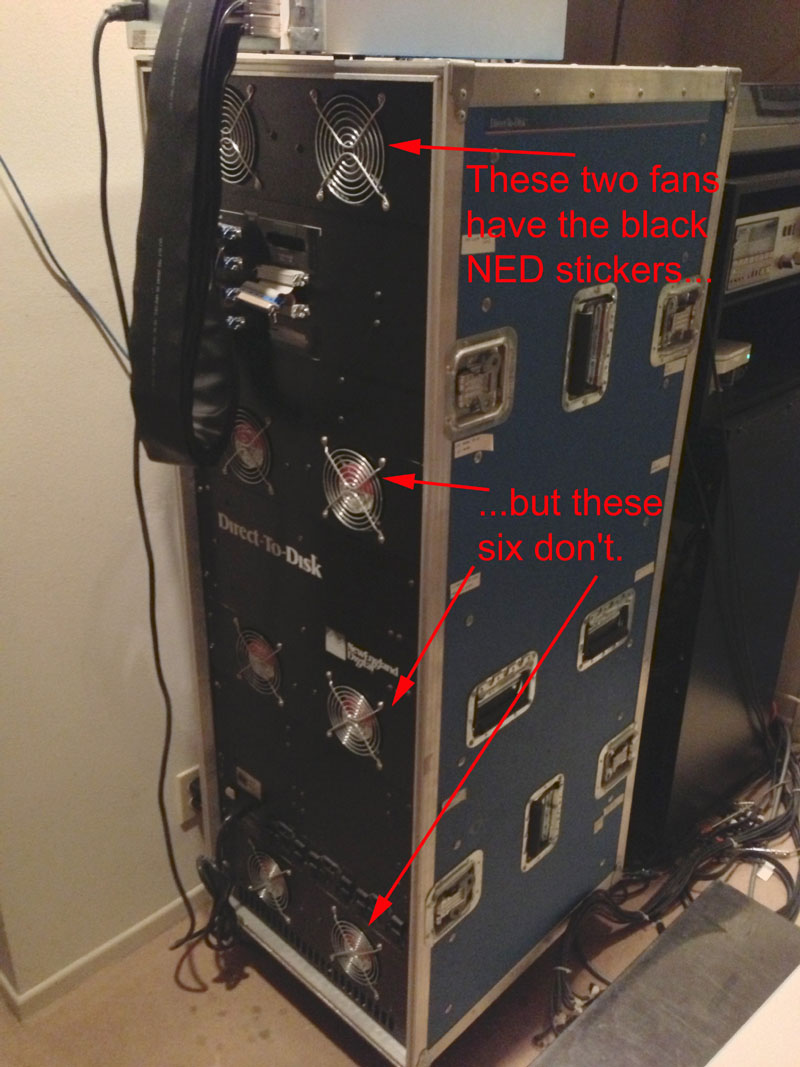 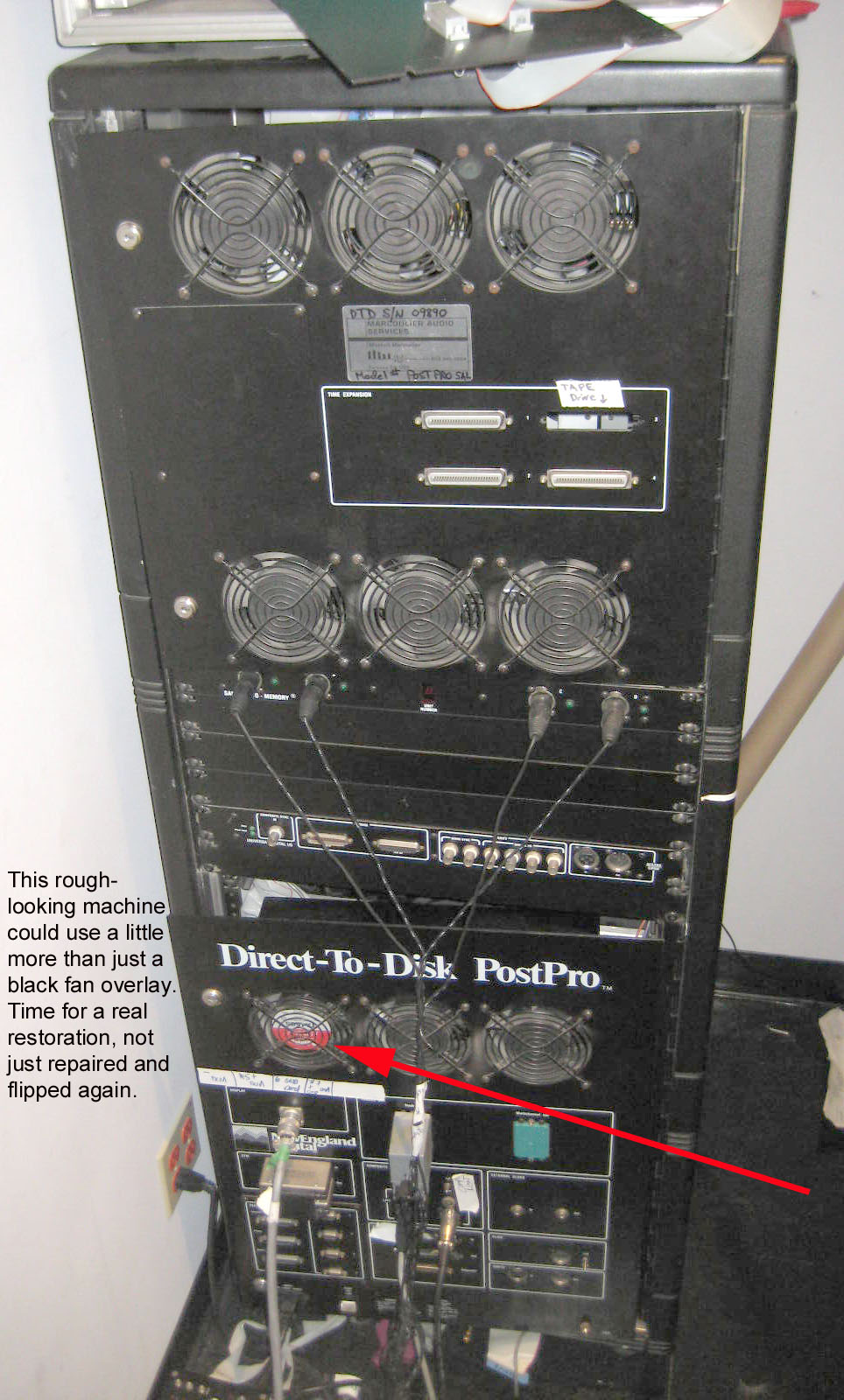